It’s Too Many Guns & Not Enough Intelligence – Not a Lack of God! 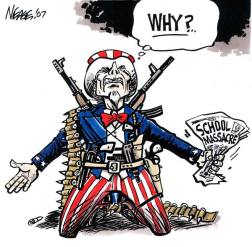 I am writing this as news of the Sandy Hook Elementary School shooting in Newton, Connecticut  is still developing and sadly, I am already seeing misdirection courtesy of many conservatives that are already stepping up to defend their guns and the American gun culture!

Dear GOD: Why didn’t You intervene and protect these teachers and children in CT ? Singed: America

Dear America: You don’t allow me in your schools…Singed, GOD

and an obviously mentally deranged individual had the guns!  Former Republican governor Mike Huckabee (someone as relevant as Ann Coulter or Sarah Palin)  joined with his rhetoric about God and I am sure if I read far enough he probably also blamed gays, Obama, and Democrats. He said, “We ask why there’s violence in our schools, but we’ve systematically removed God from our schools. Should we be so surprised that schools would become a place of carnage?” What kind of carnage would Christians have with each other trying to agree what version of God is given a “hall pass” at school? Huckabee most likely is organizing a Guns r US appreciations day so God-fearing Christians can prove their faith in God by buying more guns to be Onward Christian Soldiers and take the war to schools because damn-it, God belongs in school more than in his and other Christian’s hearts! (I still think Jesus would have peacekeepers not soldiers.)

People are saying now is not the time to discuss gun control in the US… I agree – IT WAS YESTERDAY, weeks ago or even YEARS ago that we should have been DOING something about it! It is time to stop TALKING about it and start DOING SOMETHING – NOW!! If 20 dead children and 7 dead adults at an elementary school is not a wake up call for people to demand improving gun control laws… I question whether those people are capable of rational thought! People just LOVE their guns too much and it is IRRATIONAL and borders on CRAZY!

If we do not talk about it now and/or do something now… what will be the price tomorrow? Someone you know and love dying in a gun related tragedy?

I do not have ANYTHING I would kill to protect and that includes my life! If I had children I would do all I could to protect them using MY life to protect them – not a gun! I feel kids today need more protection from conservative’s contradictory, self-serving, hate filled, misinformation than thieves or murderers. As far as self-defense – I would rather die unarmed than to kill to protect “things” – yes even if that “thing” is my life!

Guns for hunting is not the issue, so do not even mention hunting! If you need an assault rifle or semi-automatic weapons to hunt… you need to stay out of the woods anyway! I grew up hunting and I see nothing wrong with it as long a the meat used for food. Not only have I killed Bambi’s Dad and Thumper, I ate Bambi’s dad and Thumper. But my father and I never needed an assault rifle, semi-automatic weapon or grenade launcher for hunting.

It is often misquoted that money is the root of all evil, but it actually is the LOVE of money is the root of all evil and I feel the same is true of guns – it is not guns that are dangerous, but this LOVE of guns that is the DANGER! It is often said (even the Pope has said it) that gay marriage will destroy civilization. I beg to differ – I know of no one that has died of gay marriage, but I do know people whose life was damaged or tragically ended because of guns.  Like alcoholics; gun and weapon lovers first need to admit – they have a problem! God is not the blame –  GUNS are and an absence of reasonable laws for a reasonable society!