Cut Off Their Air! 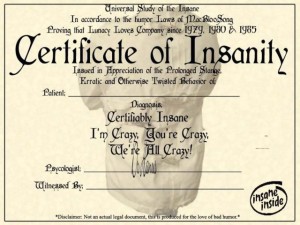 Am I the only one that is extremely annoyed by the likes of Ann Coulter, Sarah Palin, Victoria Jackson, and Mike Huckabee? Eventually as Americans we need to STOP giving them air (radio & television air time)! Although they do, along with Fox News (their life source),  help provide some classic funny moments for Bill Maher, Jon Stewart and Stephen Colbert; as a society, we need less entertaining moments based on stupidity!  Why, you may ask? Because there are people that cannot discern their craziness for what it truly is – INSANITY!

Mike Huckabee feels that if we had God in schools, it would have prevented the Sandy Hook Elementary School shootings. “We ask why there is violence in our schools, but we have systematically removed God from our schools,” Huckabee said on Fox News. “Should we be so surprised that schools would become a place of carnage?” He continues, “We don’t have a crime problem, a gun problem or even a violence problem. What we have is a sin problem… since we’ve ordered God out of our schools, and communities, the military and public conversations, you know we really shouldn’t act so surprised … when all hell breaks loose.” My first question would be how much carnage would we see from Christians just trying to agree what version of God gets the hall pass to run free in our schools? In the video below he implies if you do not vote against pro-choice candidates and vote against gay rights – you are doomed to HELL –  because we know there cannot be Christians that feel gay rights fits within Christianity!

To quote their rule book, The Holy Bible, it says, “But I say to you, love your enemies, and pray for those who persecute you” Matthew 5:44 And Oh My God they are ALWAYS on tv claiming they are being persecuted because not everyone wants their beliefs subjugated on them!  lol I cannot in any way interpret this scripture as go on tv and claim God’s hands were tied by MAN’S laws. They profess all things are possible through Christ – OH except for saving school children because Americans cannot pray in schools! Oh wait… it is ok for them to contradict themselves, but if non-Christians call them on it… we are persecuting them (which they are instructed to love – not blame). They need to come to one conclusion – Is God ALL powerful or is He only as powerful as our laws allow Him to be?

Ann Coulter can justify using the word “retard” to describe the President because he does not agree with her (link below). I feel bad even using the word to let readers know what word she used! Later she attacks Latinos with unfounded, radical, and racial insinuations that in one article are too many to list, so I share the link, because most likely you would not believe me if I tried interpreted her rantings. (here is the link:  http://www.huffingtonpost.com/2012/12/07/ann-coulter-attacks-latinos-conservatives-hispanic-voters_n_2253721.html?utm_hp_ref=latino-voices)  Yet conservatives are dumbfounded as to why the are not attracting voters to their political philosophies.

There are too many examples of Sarah Palin shooting her lips off just for some tv air-time, but I want to remind you of one – cookies for school kids.

If I told you she brought cookies to a school to share with kids, many would say that was nice of her. BUT she was doing it as a way to grand stand because First Lady Michelle Obama had been teaching children how to develop healthier eating habits to help reduce childhood obesity. Sarah Palin explained, “I wanted these kids to bring home the idea to their parents for discussion. Who should be deciding what I eat? Should it be government or should it be parents? It should be the parents.” Because heaven forbid the government teach children to eat healthy… so Sarah Palin takes them cookies!

abortionists do every day? It’s a wonder we don’t have more 20 year old “dads” doing what women and doctors have been an accomplice to for years in America. When you forget the TEN COMMANDMENTS, people, THIS is what you get.'” Her characters on SNL were usually dimwitted, so I think this proves she was not acting… it demonstrates she is actually intelligently challenged!

Posted below are the links to show this is not just in my liberal mind and I an creating this.  lol I only wish I were making it up! We as American need to stop allowing the news outlets to promote their insanity no matter how entertaining it is – it is HARMFUL! Impressionable minds (young and old) hear these things and begin to rally behind the insanity. Need an example? The Tea Party, Birthers, and religious extremist like Bryan Fischer and Fred Phelps. We give them press and it feeds their need for more. The only solutions is to stop giving them the AIR!

It’s Too Many Guns & Not Enough Intelligence – Not a Lack of God!

I am writing this as news of the Sandy Hook Elementary School shooting in Newton, Connecticut  is still developing and sadly, I am already seeing misdirection courtesy of many conservatives that are already stepping up to defend their guns and the American gun culture!

Dear GOD: Why didn’t You intervene and protect these teachers and children in CT ? Singed: America

Dear America: You don’t allow me in your schools…Singed, GOD

and an obviously mentally deranged individual had the guns!  Former Republican governor Mike Huckabee (someone as relevant as Ann Coulter or Sarah Palin)  joined with his rhetoric about God and I am sure if I read far enough he probably also blamed gays, Obama, and Democrats. He said, “We ask why there’s violence in our schools, but we’ve systematically removed God from our schools. Should we be so surprised that schools would become a place of carnage?” What kind of carnage would Christians have with each other trying to agree what version of God is given a “hall pass” at school? Huckabee most likely is organizing a Guns r US appreciations day so God-fearing Christians can prove their faith in God by buying more guns to be Onward Christian Soldiers and take the war to schools because damn-it, God belongs in school more than in his and other Christian’s hearts! (I still think Jesus would have peacekeepers not soldiers.)

People are saying now is not the time to discuss gun control in the US… I agree – IT WAS YESTERDAY, weeks ago or even YEARS ago that we should have been DOING something about it! It is time to stop TALKING about it and start DOING SOMETHING – NOW!! If 20 dead children and 7 dead adults at an elementary school is not a wake up call for people to demand improving gun control laws… I question whether those people are capable of rational thought! People just LOVE their guns too much and it is IRRATIONAL and borders on CRAZY!

If we do not talk about it now and/or do something now… what will be the price tomorrow? Someone you know and love dying in a gun related tragedy?

I do not have ANYTHING I would kill to protect and that includes my life! If I had children I would do all I could to protect them using MY life to protect them – not a gun! I feel kids today need more protection from conservative’s contradictory, self-serving, hate filled, misinformation than thieves or murderers. As far as self-defense – I would rather die unarmed than to kill to protect “things” – yes even if that “thing” is my life!

Guns for hunting is not the issue, so do not even mention hunting! If you need an assault rifle or semi-automatic weapons to hunt… you need to stay out of the woods anyway! I grew up hunting and I see nothing wrong with it as long a the meat used for food. Not only have I killed Bambi’s Dad and Thumper, I ate Bambi’s dad and Thumper. But my father and I never needed an assault rifle, semi-automatic weapon or grenade launcher for hunting. 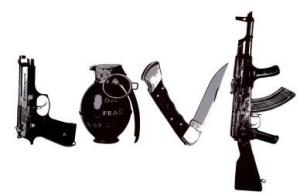 It is often misquoted that money is the root of all evil, but it actually is the LOVE of money is the root of all evil and I feel the same is true of guns – it is not guns that are dangerous, but this LOVE of guns that is the DANGER! It is often said (even the Pope has said it) that gay marriage will destroy civilization. I beg to differ – I know of no one that has died of gay marriage, but I do know people whose life was damaged or tragically ended because of guns.  Like alcoholics; gun and weapon lovers first need to admit – they have a problem! God is not the blame –  GUNS are and an absence of reasonable laws for a reasonable society!