A Prince Without a Kingdom!

young man in our neighborhood and to cope – I created my own “Land of Make Believe”.  We lived on Johnston Chapel Road in a community named Johnston Chapel that was accessed by exiting at Johnston’s Station exit from the interstate.  So being a “Johnston” was key to my fantasy world and in my mind “The Johnston’s” were royalty.  My land of make-believe was based partially on reality, but much was IMAGINARY.  Initially it may have been a way to cope with the trauma in my life, but soon it became home, comfortable and real to me.  In my world…. I was royalty – I was a Prince!

Pioneer televangelist Oral Roberts’ openly gay, gay rights activist, grandson Randy Roberts Potts was interviewed in the February issue of Details magazine (link at bottom of article).  I saw so many parallels with one major exception… he was royalty on the Oral Roberts University campus or “compound” as it was called by some and it wasn’t just in his mind!  He has been able to parlay his experience into not only an inspiring story, but also a “cause”.  He is traveling the U.S. with “The Gay Agenda”, simple performance art based on the realities of typical day-to-day lives of many gay men.

Randy Roberts Potts inspires me….. but what can I do with this inspiration?  I have survived childhood sexual molestation, I live daily with Multiple Sclerosis, I write with intent to advocate for the poor / disenfranchised / marginalized in our society; but that is as far as it seems to go.  I have tried to summon support to get heard by elected officials (only to be ignored).  So what am I NOT doing to convert ALL this inspiration into action?  How do I get feet under my words?  I am inspired to do……????  What next, what do I do?  Write more about it in this blog that has not earned me 1 dime?

So this brings me to the heart of my frustration – lack of money!  Money may not be able to buy happiness… but it sure can help accomplish a lot of other good things.  I see Cadillac Escalades at churches and think…. couldn’t they have settled for a Chevy Tahoe and done more good for fellow man with the difference in money?  I do not know how to inspire without funds to do something!!  lol  I do not even have a car, but even if I have access to a car – I don’t have gas money!! lol  No wonder the rich just keep getting richer…. the poor have no money to advocate for themselves!  I get inspired, I get frustrated not being able to but that inspiration into action, I get depressed and look for inspiration and then the cycle starts all over again!

I know the problem is me!  I have been “inspired” to learn Spanish for almost 5 years now 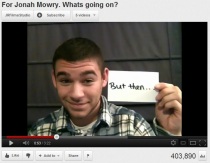 and still have a very limited knowledge of Spanish!  lol  In a post late December, I highlighted a young man, Johnny Robinson, that reached out to help another young gay man struggling.  He was inspired, took action and reached out.  His inspiring youtube video has been viewed more 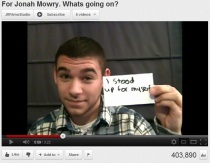 than 400,000 times by people all over the world.  But sadly, he reported on his facebook page recently that a young man in his own school committed suicide due to issues with being gay and bullied.  How can we (the willing to help) do more to help others?  I was proud watching Johnny’s video when he says, “I used to feel helpless.” “But then…” (he grins) “I stood up for myself”  I see confidence and sincerity.  He even goes on to offer his e-mail.

What more can we do?  How can we help these young men and women find that even if they cannot

stand up for themselves – there are some of us willing to stand WITH them?  Randy Roberts Potts is like

me… a Prince without a kingdom and here is Johnny Robinson (homecoming) KING of his kingdom.  Yet there are some that will not ask us to help in spite

of our offers.  The displaced gay royalty wants ALL of you to know …. you are STRONG and when you feel helpless…. there is help.  If not us – The Trevor Project (http://www.thetrevorproject.org/ or 866-488-7386).  So, how do I find MY kingdom, get past my excuses and start my own “Gay Agenda”? I start by asking for your help, asking you to let me help us all find our inner strength!