This, That & the Other – Really Don’t Matter! 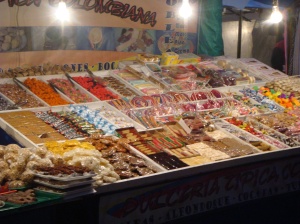 This, That & the Other

Desperation and necessity makes my decisions for me – who or what makes your decisions?  Americans (for the most part) always feel the freedom to make whatever decision is best.  But for some of us…. we lack the freedom.   Actually we have the freedom, but not the money to back the decisions we want to make.  I know people who have choices and I envy them.  They complain about this, that and the other.  If they saw things from a different perspective, I think this world would change.  I have a friend here in Bogotá that gets upset (like I do) about the lack of common courtesy used by Bogotanos in public ( in private, it would be very difficult to find friendlier people).  I told him “you may not be able to change the world, but you can change YOUR world”.  Smile, say hello, be nice and he has noticed what I said is true, he is changing his world – in general people are more polite than at first.  He made a good decision and has changed his world and I do feel changing the world is possible – one step at a time!

Desperation helps make nontraditional decisions.  But is the a decision-making process you are familiar with?  I am too familiar with this process.  Two years ago, I found myself one of the millions of Americans with no health insurance.  I have Multiple Sclerosis (MS) and 2 years with no insurance made me desperate to find a solution.  I tried and exhausted all possible solutions I knew to try.  I even found living only on social security, I made $14 a month too much for Medicaid.  That close but still to far!  After all traditional alternatives were explored, I tried being creative.  After my private insurance quit paying my private disability I had begun to explore places to live on limited a limited income and Colombia was high on the list.  Soon I found they had a government option health care system that even as a resident I could participate in.  Desperate for insurance I made the move to Colombia, South America.

Necessity also makes bad decisions for us.  Some decisions are made and made too late even when necessary.  A friend from junior high school was on disability due to cancer and had a 2 year waiting period for Medicare (same as me) and he had used his COBRA time during the approval stage of getting on disability.  The cancer returned during this waiting period.  There was a front page story about his situation in the local paper and still, he found no help.  I chose to share my stories.  Necessity left him seeking help even from having his story shared with strangers to no avail.  Healthcare reform came too late for him. Charles Aaron Jackson III, 43, died November 21, 2009 at his residence in Osyka.  I often tried to remind myself – it could always be worse.  I hate my friend was one that had it worse. I shared the struggle and when I reached out, it was too late.  Cancer got him before Medicare did.  Insurance was necessary but the decision was out of his control.

This – I often see “this” is little to complain about.  As I complained to a friend about what I felt was a desperate situation, I saw a homeless man walking up the street and picking trough a garbage bag.  My problem is a big problem, but it could always be bigger.  I am not homeless or dying from cancer.  I need that homeless man and the memory of my childhood friend to remind me to keep things in perspective.  I am so lucky, I will NEVER be homeless, my family let me sleep on their floor until they find me a bed.  Even with little medical assistance I will ALWAYS have help getting out of the tub because when my legs are too tired to stand in the shower, they are also too weak to get me out of the tub and again, my family (even elderly parents) help me out of the tub.  More than once, I have NEEDED a cocktail and I have friends that will buy me a drink (lol) even when I am broke – I will ALWAYS have great friends because they care more about helping a friend than hoarding their money.

That – “that” is not my problem.  In the last few years, I have had so many problems I NEVER thought I would have.  As with the healthcare debate, I saw it from a different perspective being one of the uninsured.  Why do we have to find ourselves in a situation before we empathize.  President Obama was faulted for wanting empathetic Supreme Court Justices.  I like that a judge can empathize.  To understand law, I think a judge should empathize with the writers of the Constitution to understand how the law should be applied and also to empathize with the people who the laws are applicable to.  Only a politician would think empathy to be a bad thing!!

& the other – It is not me so why should I worry?  I was told that I gave up my right to share an opinion about healthcare reform because I had “chosen” to leave the country (actually a cousin told me that – distant cousin).  Her complaint was she worked hard for her money and did not want to be paying for others insurance.  I have been so surprised that there is a price for life and health and there is a point people think it is too much to help.  I have alienated myself from religion because of attitudes from Christians like this.  I am happy she can find comfort in her faith because it repels me from sharing her faith.  Maybe she even prayed for Aaron, but thank God she did not have to pay more taxes to save his life.