My YEARS of admiration for electronic/appliance retailer Best Buy was single-handedly SLAUGHTERED by one manager recently.  Best Buy was one of the accounts I once “called on” when I worked for Sony.  I was able in those days to see a lot of the behind the scenes at the retail giant and I was generally impressed!  When I worked for Sony I was ever  mindful that I had the power to improve (or damage) Sony’s image for many Best Buy sales associates, I kept this in mind with EVERY interaction with Best Buy employees.  This manager named Kendaryl had the same power for Best Buy and he managed to annul my favorable impression of Best Buy.  I had always prided the company for its outstanding customer service, but one incident with one manager has affected the entire company’s standing with me.  Not that my opinion matters very much – as this manger made clear to me.

I no longer work for Sony and I am disabled.  I live solely on my social security check each month.  It is an incredibly SMALL amount and Best Buy received a large percentage of this income since electronics and gadgets make times when I am bedridden a small bit more tolerable.  During

my years with Sony, I also developed a love for electronics that bordered on being an addiction!  With my paltry income each month, in the last year I have bought 2 laptops, a 58″ plasma tv, an iPod Touch and countless items like movies and gadgets from Best Buy.  I was one of the winners in the Best Buy sweepstakes in December – winning a $300 gift card.  I also have a Best Buy RewardZone Master Card.  So it is fare to say, Best Buy GOT MY BUSINESS and I was a LOYAL customer…. as limited as my purchases may have been in the grand scheme …. it was grand in my scheme.

Along with this admiration of Best Buy came a trust.  When I bought one of the laptops the associate recommended Kaspersky Pure Total Security anti-virus software, so I also bought this.  Now, when I bought the second laptop from Best Buy with a larger screen to replace the

other laptop also bought at Best Buy…. I also got a new version of Kaspersky Pure Total Security for an additional $99.99 to protect the new computer.  As I tried to load the Kaspersky software, I kept getting a message to uninstall Norton anti-virus.  The Norton anti-virus (I am very anti-Norton) was something pre-installed on the computer, did not show on my list of programs, and could not be deleted via a directory search.  There is no Best Buy where I live, the closest one is just over an hour away, so next time I was close to a Best Buy I went into to ask the Geek Squad for help.  The girl at Geek Squad told me it would be $29.99 to help me remove the Norton so I could install the Kaspersky.

Selling me a laptop with pre-installed software, selling me additional software, THEN charging me $29.99 MORE to be able to use the additional software they sold me is what my father would call a RACKET; as defined by dictionary.com – a dishonest scheme, trick, business, activity, etc.  I asked the Geek Squad associate to get a manager because I did not feel I should be charged for this 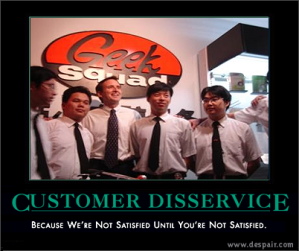 This is where, now in a rage, I said something that also included the F*#K word.  I told him he had to make a choice: 1- install the software I bought from Best Buy on the laptop I

bought from Best Buy without charging me extra; or 2 – let me leave as one PISSED OFF customer.  He chose #2.  I told them to give me back my laptop, and my gay ass grabbed the laptop and began my angry priss out of the store!  I did turn around to go back to make sure I had his name right (he was now talking with another manger) and they both GLADLY gave me his name thinking I would never follow through on what they felt were “empty” threats to make as “BIG A DEAL” as I could because of this situation!  I will be forwarding the link to this blog to any of my contacts at Sony and Samsung to see if they have contacts at Best Buy corporate that may care about this issue and also to Best Buy customer service…. I am curious as to whether ANYONE will even care?

I live with Multiple Sclerosis and know how one microscopic scar on my nerve affects my entire body.  This manager named Kendaryl is microscopic in the anatomy of Best Buy, but he has affected the entire organization of Best Buy.  I once worked retail

and I KNEW if a customer told me, “DO NOT REPEAT the policy to me again!” – it would be bad to immediately begin explaining the policy AGAIN!  Also, if a manager at Best Buy does not have the discretion to “comp” a simple service like what I needed – seeing the error of such a policy – to be able to keep a LOYAL customer from getting PISSED…. why does Best Buy even need managers?  Why was he not trained to prevent a customer from becoming irate?  Or in this case, why wasn’t he trained NOT to aggravate a customer to the point of making him (me) irate?  Yes…. I did end up IRATE!! lol

I have two $20 RewardZone reward certificates and I am so pissed…. I do not think I 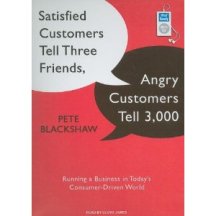 will even use them for something FREE from Best Buy!  I guess they did not read Mr. Blackshaw’s book!  I am angry, I have a blog and ironically…. I am averaging about 3,000 views a month!!  😉  Now I have two choices: 1 – explore what company will get the money I had been spending at Best Buy AND destroying my Best Buy RewardZone MasterCard; or 2 – be pleasantly surprised to hear from Best Buy that Mr. Kendaryl will be joining the thousands enjoying President Obama’s improvements to the unemployment benefits program?  I am rooting for #2!!