No One Wants to Write Their Father’s Obituary!

My family called on me to write my father’s obituary this week!  What a hard thing it was to do, but I did it, here are the results of the most difficult thing I have ever had to write!  I’ve also added a very small photo tribute!

Glen Thomas Johnston died Tuesday, March 22, 2011, after a lengthy battle with Asbestosis and complications of multiple strokes at St. Dominic’s Hospital in Jackson, MS.  He was 78 years old.  Relatives and friends are invited to attend a visitation on Thursday, March 24, 2011, 5:00 – 8:00pm at Johnston Chapel United Methodist Church, 2093 Chapel Drive, Summit, Mississippi 39666, which will continue on Friday, March 25, 2011 from 10:00am until a service of Christian Burial at 11:00 am also at Johnston Chapel UMC with Rev. Glen Martin and Rev. Allen Dearing officiating.  Interment will follow the service at Johnston Chapel UMC cemetery with Rev. Richard Boone officiating.

Yes, that is my Dad as a child in a flower sack dress, like most kids (boy or girl) wore back during the depression.

Glen was born in Summit, MS to Benjamin (Benny) Thomas and Eula Williams Johnston.  He was the 10th of 12 children.  In 1951, he graduated from Johnston Consolidated School in Johnston Station, MS, where in 7th grade he was a varsity starter, he was a two-time all-state all-star player and two-time member of the Johnston Station State Champion basketball team.  Following graduation, he was the first freshman to start as a varsity basketball player in the South Eastern Conference at Mississippi State University.  Starkville was too far away from family and he returned to finish his Associate of Arts degree at Southwest Mississippi Junior College.  During the Korean War he served as Staff Sergeant and was based at Fort Richardson in Anchorage, Alaska.  While playing baseball for the Army, he attracted attention from and he was asked to play professional baseball for the St. Louis Cardinals, but in that day, the pay was not enough and he passed on that opportunity.

Trace & Shelby selling some, if not the last Black Diamond Watermelons Dad grew.

He began his professional career as a barber in Summit before working at the Summit Post Office until retiring 30 years later.   He then began working in home construction, commuting to Jackson, MS.  His joy other than friends and family included hunting and attending grandkids sporting events.  His growing of Black Diamond watermelons and breeding high quality rabbit hunting beagles, made him well known in southern Mississippi and Louisiana.  He coached several baseball and basketball teams in Summit, Brookhaven and McComb including several state championships.

Glen was a lifetime member of Johnston Chapel United Methodist Church in Summit, MS, where he served as Lay Leader and Administrative Board Chairman for several years as well as other leadership roles in the church.  It was once said, he was a Christian man who loved the Lord and his church.

He is survived by his wife of 54 years Eleanor Matthews Johnston, a daughter Glenda and son-in-law Michael Richard, a daughter Darlene Johnston, all of Summit, and a son Thomas A. Johnston of Medellin, Colombia, South America. His grandchildren are Tara Abdul-Hadi of New Orleans, LA, Trace Abdul-Hadi and fiancée Bethany Emfinger of Hattiesburg, and Shelby Abdul-Hadi of Summit.  He is also survived by siblings Floyd Johnston, Geraldine Reed,  Erma Stockton, Bryant Johnston, Jewel Johnston and Lemelia Boone and numerous in-laws, nephews, nieces, cousins and friends, all of whom he cherished.  He is preceded in death by his parents, siblings Flora Freeman, Clyde Johnston, Eva Kenna, Elwin Johnston, and Lois Johnston. Pallbearers will be Trace Abdul-Hadi, Tim McDaniel, Scott McDaniel, Jonathan McDaniel, Ted 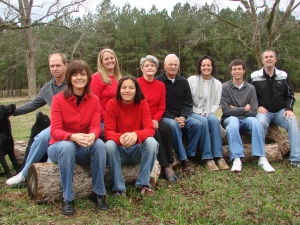 All In The Family!

Memorial donations can be made to the Memorial Garden Fund or Gym Renovation at Johnston Chapel United Methodist Church.  Alternately, in recognition of his generous nature, random acts of kindness for family, friends and strangers are encouraged. The family joins him in expressing thanks and gratitude to all that supported him through his health battles including Dr. Ruth Fredericks, the staff at St. Dominic’s in Jackson, the membership of Johnston Chapel United Methodist Church and the friends too numerous to list who kept him in prayer.

Yes, that is my Dad as a child in a flower sack dress, like most kids (boy or girl) wore back during the depression.

Trace & Shelby selling some, if not the last Black Diamond Watermelons Dad grew.

All In The Family!

Dad in His School Days

Befroe They Were Mom & Dad…. They Were Just Boyfriend & Girlfriend

Dad Was Even Once a Young Parent

PawPaw’s Princess Was Also His Nurse!

Always Together In Good & Bad

4 thoughts on “No One Wants to Write Their Father’s Obituary!”