Up in the Air and a Few Miles Short! (Seeing My Life In Movies) 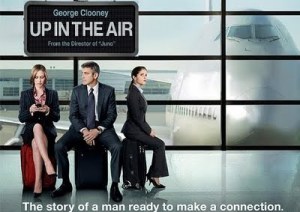 Recently I watched the movie “Up in the Air”…. ok actually, I just watched it!  Clooney’s character is striving for the recognition of American Airlines by achieving 10,000,000 air miles.  I understand his quest like few can.  I am a former Marriott Rewards Platinum Elite member.  I know the thrill I had opening the letter from Marriott and seeing that card.  I was always looking at the Sony LCD flat screen tv that could be purchased using the points – but I was always a few points short.  Forget the fact I worked for Sony!  I wanted the miles to buy me something because I felt so alone and had no one to buy me things I wanted.  Actually, there are few people who even knew what I wanted.

In the movie Ryan Bingham (George Clooney’s character) flies around the U.S. firing people.  Ryan is a likeable guy, but he does not seem missed when he is gone and the few that do miss him begin to accept their place in his life – at a distance.  His ambition to meet what most see as a shallow goal is what brings him comfort in the absence of real connections with people.  It is easier for him live “up in the air” and away from actual connections with people who may get close.  The acknowledgement of American Airlines is more important than appreciation of other people.  I so relate!  Except I always connected with Delta.

Most people booked their air travel with Orbiz, Epedia, or even travelzoo.com to get a deal on flights.  I actually went directly to delta.com and searched and searched to find the flight that would meet Sony’s travel & expense guidelines so I could get my SkyMiles.  Many co-workers booked through the company travel group and just took whatever flight they gave them – but I worked at finding a Delta flight.  I then asked the travel group to purchase the ticket for me.  I had flight numbers and times ready along with information showing Delta had a lower price than the Sony “prefered” airlines.  Such dedication for loyalty.  As I looked at the Sony tv in the SkyMiles catalog …. I found I was always a few miles short.

Mr. Bingham had a crap job, but he liked it.  There are few that would have enjoyed my job like I did.  Do you remember Del Griffith, John Candy’s character in the movie “Planes, Trains and Automobiles”?  The guy sold shower curtain rings and traveled constantly… but he LOVED his job and his customers loved him.  His job was a thankless job like mine.  No matter how good a job a did…. no one noticed other than my customers.  I had a a bitch of a boss that did not like me and NO ONE liked her but she has now even been promoted.  Why can’t a company as great as Sony see what useless crap she is!  I helped the company, my customers loved me, but I was held back because she was simply a bitch.  But despite all the reasons for me NOT to like my job I loved it and was good at it.  But when it came to the big money…. I was a few dollars short.

As I mentioned, with Marriott I had achieved the highest honor for Marriott Reward members – Platinum status.  It took staying 75 nights to reach this level of achievement.  I will say that I was staying at the Courtyard by Marriott… not actual J.W. Marriott or Marriott hotels.  Courtyard was great and designed for the business traveler – which I was.  I stayed most often at the downtown Courtyard in Salt Lake City.  The guys and girls at the front counter got to know me quick.  As a Platinum member I would get upgraded to a suite if one was available and often one was available.  A big suite for a lonely traveler filled the void that was missing because of no personal connections.  I received welcome gifts of cookies and bottled water; and yes that little shit meant a lot to me – for some reason!  As I would look in the Marriott Rewards catalog …. I also found I was a few points short.

My Multiple Sclerosis has grounded me from earning my SkyMiles and I stay few nights at a Marriott brand hotel.  But no one has noticed.  I go from being a 5 year Platinum Elite Marriott Rewards member to nothing and no card, letter of gift bag asking where did our loyal customer go?  I book my flights now on travel.com because I know my one or two trips a year will not add up to my seeing status with Delta again.  I still sometimes look longingly at the upgrade board to see if my name may be there – now it never makes the list.   But as with MANY things in my life….I have come up a little short, but I still like my shallow, self-indulgent and even sometimes lonely life.  I am an island…a small crappy one… but the views are great!  To be the big island everyone wants to visit…. my beach comes up a little bit short!

I actually felt I missed my friends when I was traveling and looked forward to seeing them when I returned home.  Now my trip is more permanent, I see I am “out of sight and out of mind”.  I hate that my Multiple Sclerosis robbed me of the life that made me comfortable.  Having lost my status makes me feel lost sometimes!  I still look for and desire that status I once had that no one noticed or cared about but me.  I now also belong to Jet Blue TrueBlue as well as remaining a SkyMiles and Marriott Reward member… but have no status with any of them.  Life for me is like working for Sony but wanting that Sony tv in the catalog …. I am always a few miles short!!  I look sometimes in the mirror and still see my inner Ryan Bingham, but I see I have no status anymore… I NEED to be UP IN THE AIR!!!

2 thoughts on “Up in the Air and a Few Miles Short! (Seeing My Life In Movies)”